This paper presents an analysis of the energy and water requirements of an electrical dishwasher in Nottingham to that of hand-washing the same load.

The experiment was carried out on January 5th 2010 under strict laboratory test conditions within a clean room environment.

This paper concludes that, in this particular case, it is more energy and resource efficient to wash dishes by hand.

Long has it been argued by lazy people that we should let machines do the work we don’t really want to do. Top of that list is cleaning of any kind, especially dirty dishes after a slap-up feast. To that end, human civilization created the electrical dishwasher, a pinnacle of modern technology. Recently more and more people have been asking ‘Why? Are there not more pressing problems in the world’ and also ‘What consumes the least energy – washing by hand or using the electrical dishwasher?’. This last question is of imminent concern due to the fact that washing machines are close to self-awareness and hence should be banned due to the slim probability that they create an army of super-intelligent, evil dish-washing machines, hell bent upon destroying humanity. Or it could be due to a link between energy consumption and climate change. Whatever the reason, we aimed to answer that question within one house within one street within one country of the world.

The unit is an ‘A’ rated efficiency machine with a quoted energy consumption of:

(Setting E, with the stupid symbol, actually means rinse the dishes and hold them)

The dish-washing machine was filled with dishes from a rather nice meal of curry and rice.

Water consumption was measured by collecting the output water into a large plastic container.

This test-rig was designed to comply with the internationally recognised dishwasher machine testing standard: EN W05HM3UP.

These photos show the experimental apparatus: 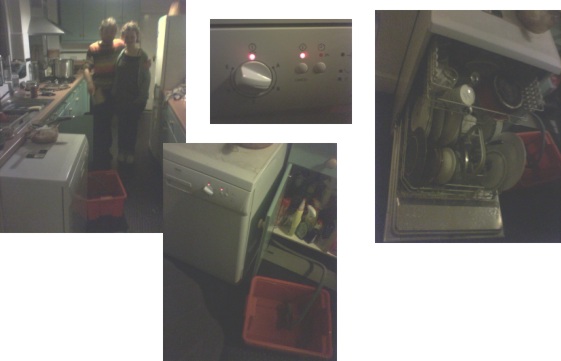 The energy consumption of the dishwasher on normal mode is 2.175 times greater than the energy required to hand wash. Hence it is better to hand wash than use the normal setting.

It is interesting to see that the measured value is within the quoted energy consumption range.

If the ECO mode was used (and assume the figure is accurate) then the dishwasher would consume just 1.31 times the energy required hand washing.

The water consumption of the dishwasher is 1.75 times that of hand washing.

Hence in both cases, and even using the ECO mode, it would be better to wash by hand than use this ‘A’ rated appliance.

This does not take into account the embodied energy of the dishwasher itself (which would further enforce the case for hand washing) nor the energy requirements of the hand-washer (estimated to be around 1/20th of a Mars bar, or 1/8th of a hippie vegan snack).

A pdf of this report is here.

One response to “Dishwashers vs hand washing”