I have just finished a speed monitor for my pedal generator. This is designed to give feedback of the speed of the rider (in MPH) if they were moving along while they are on one of my pedal power generators. I could have just used a simple bike computer, but I wanted something a bit more obvious and interesting… 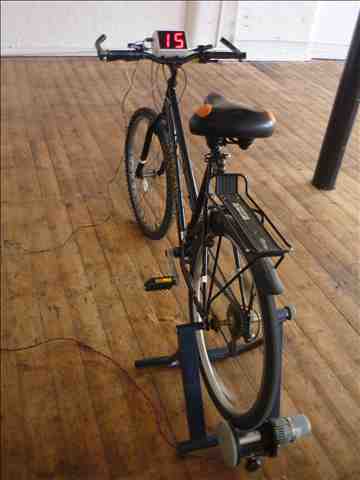 I run a number of events where I set up a pedal generator to power various electrical loads such as sound systems, bubble machines, smoothie makers and water fountains. People enjoy pedaling but, as they are stationary, need feedback on how fast they are going. This unit displays their speed in miles per hour in large red 7-segment, slightly retro display.

There is a short video of the unit in action here:

The inside of the unit is shown here: 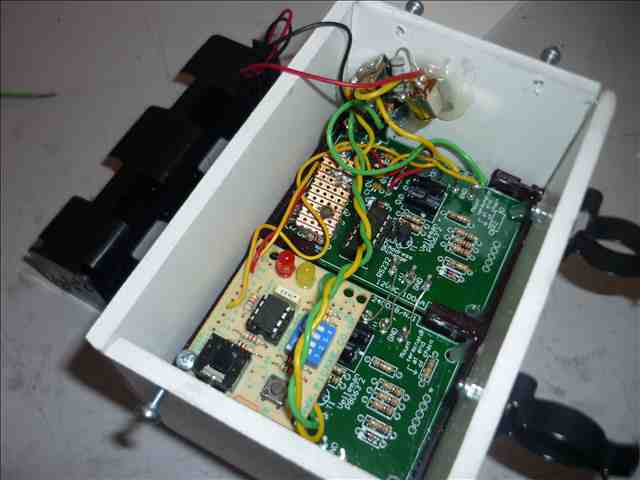 I used two large 7-segment LED displays which were a Velleman kit number K8063. I had picked these up from Maplin electronics when they were on sale as I thought they would be useful at some point in the future. They have a PIC microcontroller and read in RS232 data to change the display. They are 12V units.

I used a PICAXE microcontroller (the 08M tiny 8pin unit) on the AXE092 experimenters board. This reads the pulses coming from a reed switch on the back wheel. The pulses are generated from a magnet affixed to the back wheel which activates the reed switch. The pulses are counted and converted into a MPH data which is then sent to the K8063 display as serial data.

A 7805 voltage regulator gives the correct voltage to the PICAXE and a 12V rechargeable battery bank is used as a power supply.

I used some white plastic to create an enclosure and some tool clips to hold it to the bicycle handlebars.